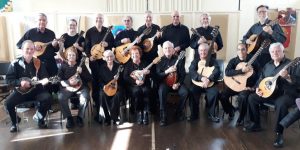 In conjunction with this year’s Colonial Ball

A concert with the Canberra Mandolin Orchestra

at the Albert Hall, Canberra

On the same day as the Colonial Ball, at the historic Albert Hall, the Canberra Mandolin Orchestra (CMO) will present an afternoon concert of the wonderful music settlers brought to Australia after 1945 from Britain, Ireland, Italy, greece, the Balkans, Northern Europe and other areas of the world.

The concert features music from songs, dances, tunes and light classics, all played by the shimmering sounds of a massed plucked instrument orchestra.

Tickets for the concert are just $20, however MFS members and anyone who has bought a Colonial Ball ticket will be offered the concession price of $15. Tickets available at the door, or call 0407 431 332.

So, if you a local, why not enjoy a relaxing and informative concert in the afternoon, prior to getting ready for the Ball. If you from outside of Canberra, here’s an excuse for arriving early.

Formed in 2003, the CMO brings together players of mandolin, mandola, mandocello, guitar and bass. It keeps alive the rich tradition of the mandolin groups that emerged in the first couple of decades of the 20th century. The CMO’s repertoire is very wide showing the versatility of its musicians. Click here to go to the CMO website.

The home of civic and cultural activities in the national capital, Albert Hall (- location map) was opened in 1928, the year after Old Parliament House. It was Canberra’s concert hall, theatre, exhibition space and the venue for lectures, balls and socials. As the place for civic assembly, it housed congresses, conferences and protest meetings.

Opening the building on 10 March 1928, Prime Minister Stanley Melbourne Bruce declared Albert Hall would encourage ‘everything that will uplift the Australian people – a centre from which will radiate all those aspirations that are truly national’ (Canberra Times, 12 March 1928).