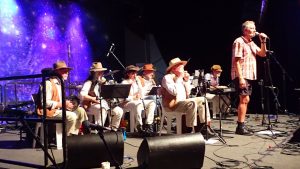 The Bush Capital Band plays the music for the Bush Dance Group (BDG) dance classes on Monday nights except during school and public holidays, and the monthly BDG “Second Saturday of the Month” Bush Dances – see  Calendar

The venue during autumn, winter & spring is the All Saints church hall, corner of Cowper and Bonney Streets, Ainslie, ACT.  In summer, the venue is Stage 88 in Commonwealth Park, Parkes ACT.

For the Monday night classes the format is ‘open stage’ where the opportunity exists for new and/or inexperienced musicians to join in and play along.  The music is normally played at acoustic level with a minimal PA system provided to allow the band leader and the caller to be heard above the general din.

The group is lead by Bob Hodgson (chromatic harmonica) and Dave Wardle (other things), and consists mainly of sight reading musicians, although some prefer to play by ear.  The music the band plays is a mixture of the Anglo Celtic traditions and includes a healthy proportion of tunes collected from Australian sources.  Sheet music /PDF files are available for all of the current repertoire.